InteractiveSQUASH | Motion Tracking Sports and Fun Game Pong
Motion Tracking or Motion Capture is a technology that tracks the player's movement with 3d Depth cameras. This feature helps players to become better in their sport by analyzing their movement. Motion Tracking is not only used to record the athletes' movement, it can also be used to play entertainment games such as pong.
Motion Tracking, Movement Tracking, Motion Capture
19473
post-template-default,single,single-post,postid-19473,single-format-standard,ajax_fade,page_not_loaded,,qode-title-hidden,qode-theme-ver-9.5,wpb-js-composer js-comp-ver-6.0.5,vc_responsive

Motion Capture is gaining more and more traction and attention in the world of sports. The process of recording the movement of objects and people opens new training possibilities for athletes. But the technology also adds an immersive entertainment experience for kids and adults. Your body is the controller. By running, jumping in the court the player interacts with the game.

A new Motion Tracking game is coming to interactiveSQUASH. Oldie but goldie. We’re bringing one of the oldest video game classics to the digital age. We all remember the tablet-tennis game Pong on our old computer. We revived the world´s first video game and brought it to the 21st century as a mixed reality sports experience and combined it with our movement tracking feature. The future is now and we invite you to be part of it. 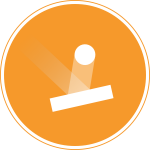 How does this Motion Tracking Game works:

The motion tracking detects every step and move of you and your opponent. Pong has been around since 1972 but it has never felt this intense and exciting. Because this time, you are the paddle and by moving around the court, you directly control what’s going on, but so does your opponent. Each player tries to shoot the ball to the others side. Win the Game by breaking your opponents guarded wall behind the paddle. Every hit breaks a brick of your opponent. The player who breaks the wall of the counterpart faster wins the game.

Our new game “Pong” comes along with some funny Power-Ups to make the game even more exciting. You collect these power-ups by moving to the position where they would be on the court. The ball and paddles are fully driven by actual physics, so use your own momentum on the court to get the ball in game to neck-breaking speeds to beat your opponent. We put following Power Ups in the game to challenge you and your opponent more. Welcome to mixed reality gaming!

Double the size of your paddle and increase the chance to hit the ball back. To catch the black icon on the playfield you can either run to the area or simply use your arm to activate the Power-Ups.

The Fading Power-Up in “Pong” will make the ball invisible for some seconds and make it more challenging for your opponent play the ball back.

What is Motion Tracking?

The motion tracking feature enables to track every step, move and hit of the players in the court, to analyze the players performance in real-time. The system is operated by intelligent A.I. As a result, it let you know if you’re too far or too close to the wall when hitting your drives. The video tracking and analysis feature consist of 4 individual cameras strategically placed within the squash court. It changes how the way how coaches interact with their players.

How can motion tracking technology can be used in squash training?

Ghosting always seems like a boring exercise, isn’t it? With motion tracking you can practice it guided by your interactiveSQUASH court! Follow the lead and be fast! Check your results and improve them over time. The Motion Tracking Game Ghosting replicates typical movement patterns and game situations on the squash court. The app also measures the players’ performance such as distance.

Coaches and players will be able to go over performances or training sessions side by side. Our Motion tracking will provide players with a wealth of statistics. For example, running speed, how fast they’re returning to the ’T’, and much more. Through that it is possible to provide immediate feedback based on real-time video.

Players can analyze their performance and clearly identify necessary areas of improvement. This is crucial for professionals who are continuously seeking to improve their skills. It is also indispensable for beginners who will be able to track their progress.