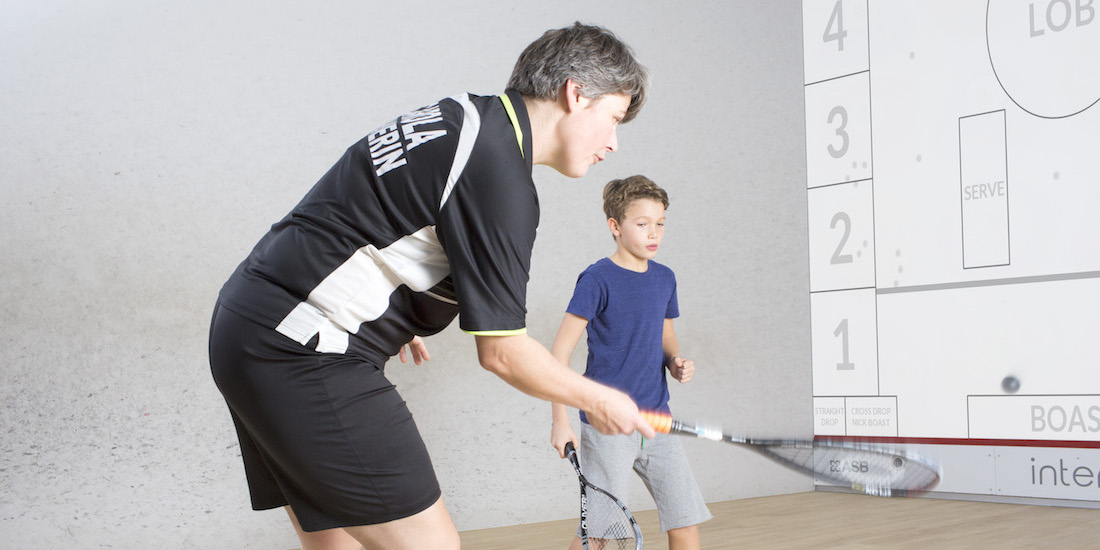 Advanced squash coaching  – Did you know that interactiveSQUASH can be used for more than just playing games?

It is also a feature-rich coaching tool to provide players with instant visual feedback and analysis on their game as well as making solo training sessions more meaningful.

We spoke to one of the first coaches in Germany to integrate interactiveSQUASH into her training routines. We were interested in her answer to: What can coaches gain from using interactiveSQUASH?

Every ten years or so there’s a new trend in Squash. Coaches with extensive experience will be able to take the best from what they’ve learned and apply it to their own unique brand of training modules in interactiveSQUASH. 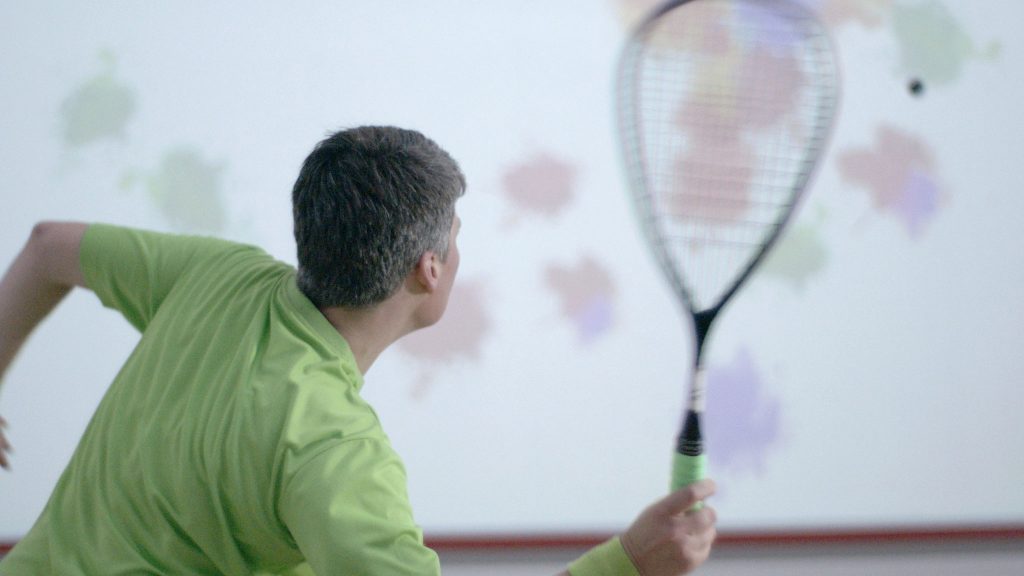 Carola plays Splash, one of the first interactiveSquash games.

About Carola – the first coach to use interactiveSquash

Carola Weiss has coached squash at Sports4You for three years. Her background includes playing in the National German Squash League, coaching the Junior Squash Leagues of Bavaria and working with pros like Silvia Schnellrieder for the German semi-finals.

Carola was introduced to interactiveSQUASH in the summer of 2016. At first she enjoyed playing solo games and the novelty it brought. However, she soon realised the far-reaching potential interactiveSQUASH has to offer in terms of expanding her toolbox in squash coaching sessions. “Once you start training junior players with interactiveSQUASH, they want to stay in the court longer.” explains Carola. “They have sharpened focus. They want to learn, and this makes progress much faster. It might even draw kids out from behind their devices and into the squash court.”

Throughout the discussion, Carola emphasises that being able to focus is key. One of her favourite players is Sabine Baum (former German No.2 and long years rival with Sabine Schoene, Germany’s best female player ever): “When she walked into the court and door closed, her presence turned in to a powerful, intimidating force – that’s how focused she was”.

Watching beginners develop a greater skill-set under my guidance and seeing their enthusiasm grow as they progress is what I love most.

Disputes sometimes arise between coaches and players about where the ball lands. The current solution to this issue is to review video footage – a method that can interrupt flow and rob players of precious court time.

By contrast, interactiveSquash provides instant visual feedback enabling coaches to objectively assess performance. This feedback also communicates to players directly. “[Squash coaching with interactiveSQUASH] is more effective because it shows people where they have to play versus where they actually play. It gives a much clearer impression of where their level lies, and this is great for helping players progress faster”.

How interactiveSQUASH works in training sessions

She maintains that having a fitness regime is essential to playing squash too, but elaborates “interactiveSQUASH really helps when I’m trying to tell people how to play. For example, if they want to hit a hard long line, or a soft service, it’s easier for me to explain what exactly they should aim for. This is especially true of the new interactiveSQUASH Training Wall”.

The value of integrating games and training modules

“The training modules are more serious, and can become frustrating for beginners. That’s why the games are a great way to cool a player’s head down. You still get feedback on shots, and you have fun whilst learning”.

Carola firmly believes that interactiveSQUASH can be effective for entertainment and training. However, players need to decide which one is more important to them. She says “There’s a difference between training, and playing against a friend to win a beer”. 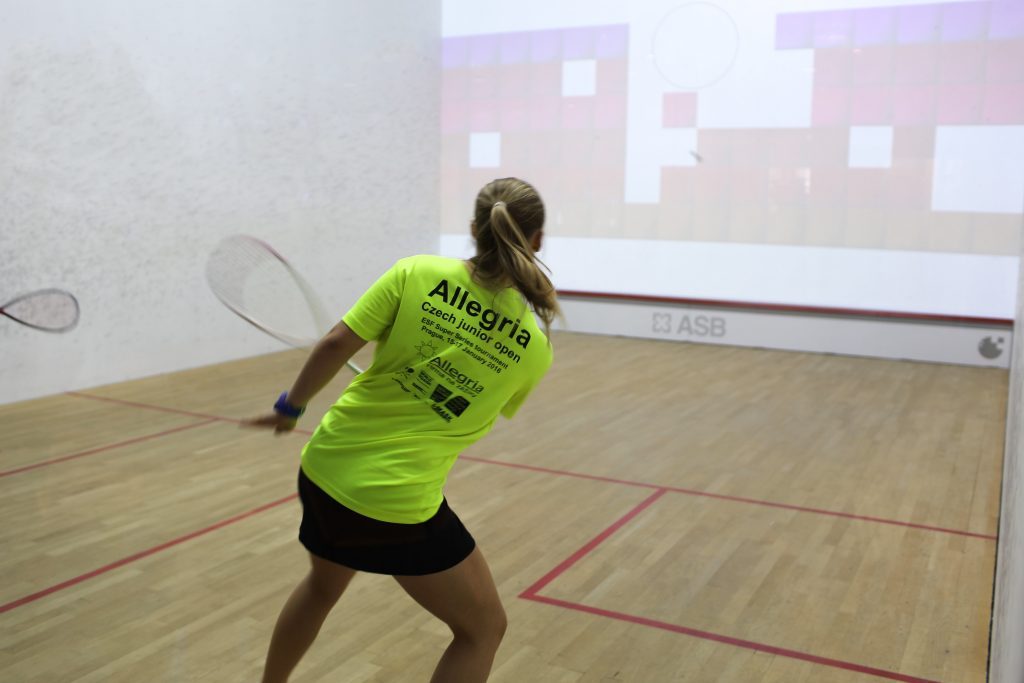 If Carola could make an interactiveSQUASH game…

She would love to see a game where the player is, for example, moving down a street and has to hit targets on the left/right as they progress forward.

How interactiveSQUASH could impact the future of coaching

“interactiveSQUASH is not here to reinvent the racket. It was designed to get more people involved in squash and help current players to enhance or refine their skills. interactiveSQUASH won’t show up during an international tournament, the focus is on getting points then. That doesn’t mean it’s not a great training tool”.

Main advantages of interactiveSQUASH for coaches

The main advantage of interactiveSQUASH coaching is the ability to check results. This is made possible by consistent feedback provided by interactiveSQUASH on the front wall. “It’s makes it easier for the coach to describe the aim and the targets of an exercise”, Peter explains.

When coaches realise the benefits of interactive Squash, they can be more creative and can invent new, better and more innovative training routines and programs. 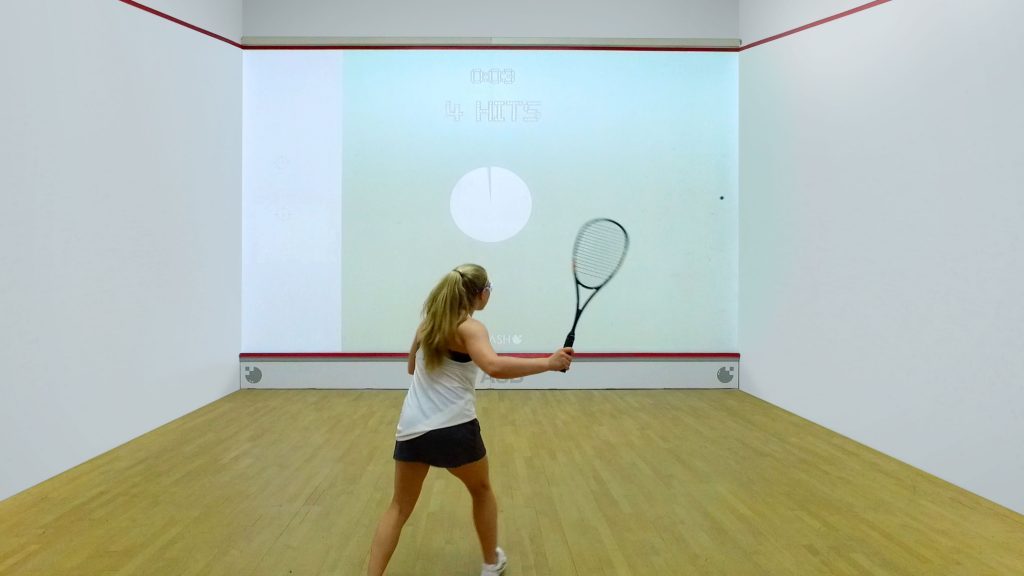 A player works on her volley technique with Butterfly.

How interactiveSQUASH can influence non-squash players

As interactiveSQUASH is visually appealing and monitors results, it is also more comprehensible to the general public. It clarifies the coach’s objectives and the player’s aims. This makes a coaching lesson more interesting and the coach will get more people interested in personal training.

In the end coaches will become even more valuable to their students using interactive Squash coaching.

That was a bit about coaching with interactiveSQUASH from a passionate squash professional.