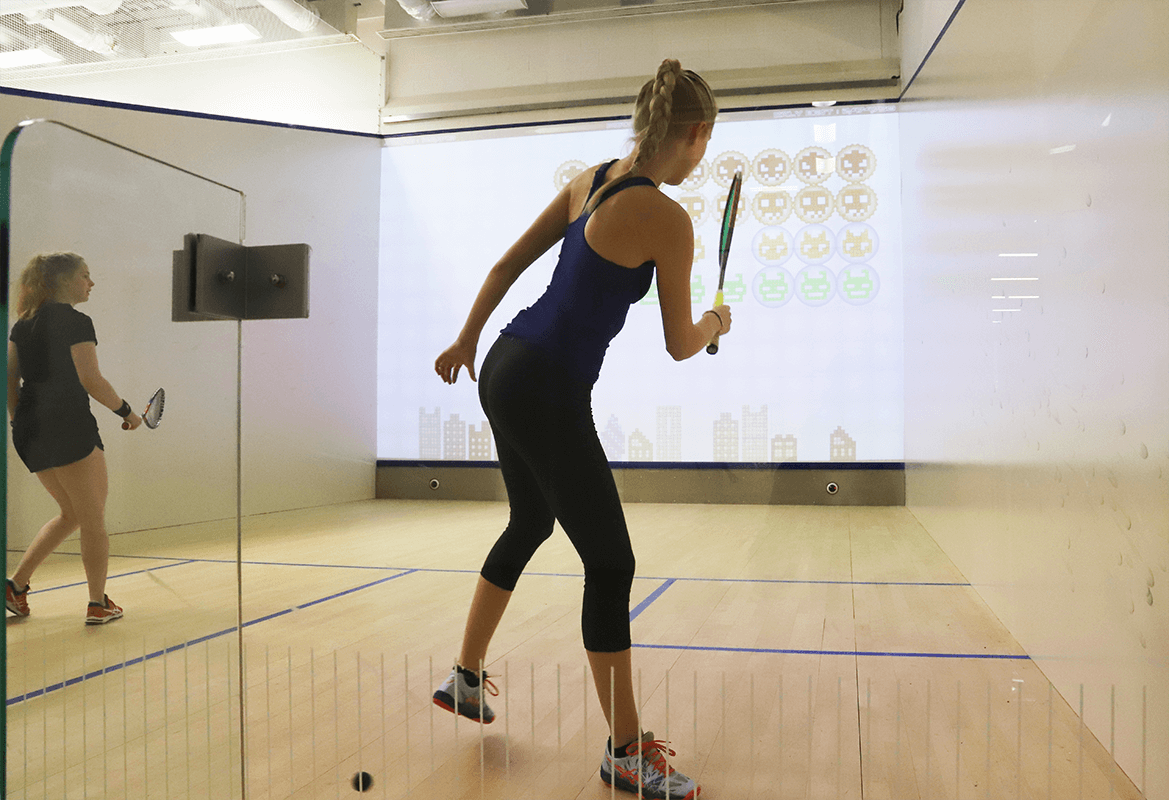 interactiveSQUASH transforms any squash court into a smart court that tracks every move and every shot you play. With innovations in a game that has been waining in popularity, especially amongst the youth, interactiveSQUASH is taking the game by storm.

We caught up with their founder, Markos Kern to hear about the product that started off the gamification SportsTech company, FUN WITH BALLS.

Zushan Hashmi: A little bit about yourself outside of the SportsTech space? Perhaps, sports and technology?

Markos Kern: I started my first company in events and marketing at the age of 20.

Since then I’ve been known to do a lot of crazy projects, always circling around visual media, tech and channelling people’s attention to certain topics, which also led me to open a surf school in North Korea and do art installations in Antarctica.

I always loved to play with tech and use it to amaze people.

Tell me a little bit about Multiball?

Multiball is our latest product, bringing mixed reality sports tech into schools, smaller clubs, or even in your home.

The system works with sensors tracking every ball and the players’ motion to create an immersive playing experience that will make you engage in all sorts of physical activity for hours.

And how about interactiveSQUASH? The idea and technology?

interactiveSQUASH is where the idea was born and also part of our focus on the first sport we wanted to upgrade to the 21st century.

Given that squash is not one of the most attractive sports for youngsters today, we wanted to make it a much better experience.

Developing the tech was tricky, especially due to the extreme velocity of the ball and the players and the precision we wanted to achieve.

We’ve seen a massive increase `{`in people playing squash`}` and the nice thing is that 60-70% of players in commercial centers are people that habe never played the sport before and tend to be below 25 years.

Where did the idea of MultiBall come from? and in particular, interactiveSQUASH?

Being hyperactive and easily bored myself, the idea to mix the words of sports with gaming was actually pretty obvious to me.

The trick was then to create a working and scalable product with my team which is easy to use for a variety of audiences.

What have been some of the personal challenges of growing interactiveSQUASH?

Developing such a complex system and also looking at a very conservative sport, many things take their time. It’s a classic “Startup meets old industry” case.

We were able to speed up many things and work with great partners like the Professional Squash Association, but also had to learn that sometimes a little patience is needed.

Squash is not the first sport that comes to mind when you hear of Sportstech innovation.

What was it about squash that made the sport a great option for this technology?

First, it’s an immensely undervalued sport when it comes to athleticism, speed and the level which it is played on.

Secondly, the sport has not been managed well in the last few decades, especially when it comes to the youth and making the sport “sexy” today.

This presented a great opportunity to revolutionize and even disrupt the sport.

With some centers now using their interactive courts up to 300 hours a month, not the average 80-120 is a pretty good sign we are onto something.

There is a longstanding debate that squash is now an ‘oldies’ game, however, interactiveSQUASH has shown that kids and young people can also enjoy the game. Can you tell me a little bit about that?

When you look at the numbers it definitely is, but we’re on a very good route to change that. Squash had its high in the ’80s and ’90s and neglected focusing on the next generations since.

This is also the reason that the audiences on the pro tour reassemble the same demographic as in most centers around the world. Men over 45. There are some exceptions like the US where squash is still strong as a college sport, but there is a massive need to get kids into the courts to show them that this sport can be pretty awesome.

How do you bring the ‘fun’ to squash? Making it more accessible for children.

Everybody loves computer games and they present an easy way to lead kids and beginners over the first, sometimes very annoying, few hours to learn the sport.

Even if it’s just learning how to throw the ball or some hand-eye coordination stuff, once you have to hit monsters on the front wall, your mind switches into game mode.

It is then when you completely ignore the tough parts of the sport and start learning, later on, it even tricks you into going far beyond your fitness to beat that desired global high score.

What are the types of virtual games on offer with interactiveSQUASH?

We start with very simple games that include colourful, big targets and then slowly lead up to very sophisticated training modules for professional athletes. Some of the games are also used for other sports or even training children with disabilities or going through rehabilitation.

And what are the difficulty levels of the various games on offer with interactiveSQUASH?

They start by throwing a ball at a very large target from 2-3 meters away, something even three-year-old kids can have fun with for hours.

Once you pick up a racket, timing and strategy are added to make the games more complex and also establish some competition.

The upper end is very complex games like Memory where you have to find pairs of animals while playing squash against your partner and competing with their strategy to sabotage each other for points.

This then becomes a crazy game of chess added to an already very complex sport, which might be slightly overclocking to some people in the beginning.

But once you look at a nine-year-old beating a squash pro in that game, you’ll understand that this is only the beginning.

We as a society will have to ensure we keep these sports alive and attract future generations to physical activity to stay healthy.

And this is exactly our mission by merging them with gamification to keep people hooked to what’s fun and healthy at the same time.

What is the technology able to track in terms of the performance of the players?

To track the players, we developed our own motion tracking system which takes their position into consideration in our games.

It is great to track statistics but provides even greater value when it comes to using this data in real-time to make games harder or easier.

What are the numbers on the increased use of squash courts after they install interactiveSQUASH technology?

Our average of played hours of upgraded courts at this point is 213 hours per month.

This means there are some courts like in New York that clock in over 300 hours per month, but also some exclusive or private ones that are used less.

Generally, we’ve seen a massive increase and the nice thing is that 60-70% of players in commercial centres are people that never played the sport before interactiveSQUASH and tend to be below 25 years.

Together with the good financial feasibility, this creates a very nice picture for growing the sport by enabling the operators to grow revenues and their players base.

Recently, you’ve signed a deal to work with the PSA, can you share any details about that?

We started working with the PSA a while ago already to introduce detailed statistics and tracking at matches and had a very good relationship in developing attractive elements for events and the matches.

Our goals are very much the same in this respect and the PSA has proven to be one of the main players in the sport to innovate and make the sport more attractive.

What I can say for now is that we are working on some next steps to integrate tech into the sport and improve the event and viewer experience, but the rest is still in the making.

How about with Squash Bundesliga and England Squash?

In the beginning, we were very stunned to see that the [squash[ federations were not very welcoming (or even responsive) to what we were bringing to the sport, even after seeing that we provide a steady influx of new players.

After almost three years on the scene and our centres performing very steadily, we are now seeing more interest, to make use of this to help centres improve and grow participation.

Working with these institutions is very important for us and also provides us with more insights to deeply integrate into the sport.

And also to sometimes battle the scepticism of the older generation of club owners and operators which still don’t trust this scary “computer game squash”.

How many countries now have a court with interactiveSQUASH installed?

We are now in 14 countries with some more European and Asian countries in the pipeline.

What do you envision for the future of interactiveSQUASH?

Our lives will only continue to be more digital and our attention span will demand more and more entertaining activities to be considered as attractive.

Also, we as a society will have to ensure we keep these sports alive and attract future generations to physical activity to stay healthy.

And this is exactly our mission by merging them with gamification to keep people hooked to what’s fun and healthy at the same time.

After all, what applies to our bodies, applies to whole sports as well.

Noor Shafiq assisted in the curation of this article. You can follow him here on LinkedIn