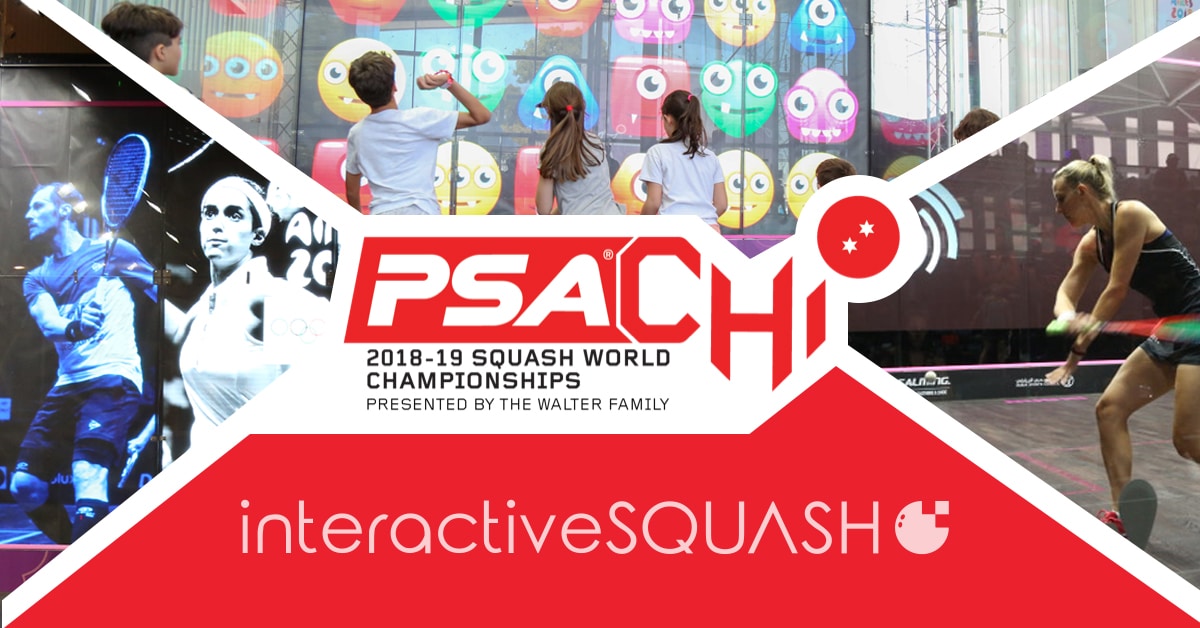 Posted at 23:03h in Events by Dennis Fischer
Share

The presence of interactiveSQUASH at the PSA World Championships 2019 in Chicago marks another great success for our Startup, Fun With Balls GmbH. After Dubai and YOG in Buenos Aires, our interactive front wall is ready to conquer a new audience!

After being unveiled at last year’s PSA World Series Finals in Dubai, the interactive front wall was a huge success at the Buenos Aires Youth Olympic Games in October 2018, where has we all know squash showcase was a huge success, with more than 25,000 people who came to take a look in Buenos Aires (including officials from the IOC, who were reportedly very impressed) and over 400 kids per day entering the show court. Now it takes the stage at PSA World Championships 2019 in Chicago, thus keeping at the great job and creating big momentum for the sport.

Our presence during the most important squash event of the year marks another step forward in the tireless struggle of squash to bring more innovation in the sport, in order to get more participation and engagement. How do we want to achieve that? Our main keywords are fun and entertainment. Fun should always be on top of our minds when planning our efforts to grow the sport, as well as entertainment to lower those barriers that make squash perceived as an elite sport that is also not so spectacular. The way we tackle this with interactiveSQUASH is through creating an immersive experience, packed with exciting visual and fully interactive gameplay. At the YOG we have used the system, with its sensor loaded tins, tracking cams and even infrared, paired with a full LED video front wall that was build behind the glass to create the perfect display for scoring, sponsor’s logos & videos, a World Squash Day activation and, most remarkably, constant action with targets and explosions becoming part of the friendly matches. The system was also programmed to help running the demonstration, that had a special time-based format, using audio and visual queues to create a smooth flow of timed warm-ups, games and breaks. This vastly facilitated the work of the organisation and was really well received also by the players.

Chicago PSA World Championships is a tournament to be remembered!

Now, with the PSA announcing our partnership at the World Championships presented by the Walter Family, inside Union Station’s Great Hall in Chicago, the whole operation moves up several notches. Held between February 23 and March 2, the PSA World Championships is the most prestigious tournament in professional squash and will this year offer a record $1 million prize purse, which will be split equally between the male and female athletes. This year more innovation and interactive features will be created to enhance fan engagement at its best by offering the most interactive, wow-ing and entertaining experience to the public at the venue and at home watching the event on SQUASHTV (Eurosport Player in Europe).

In spite of squash being excluded from the list of sports to be added to the Olympic games at Paris 2024, we keep pursuing our mission to bring game-changing innovation to the sport, to help it to grow and to finally achieve the success and recognition it deserves globally. For this reason, here at the World Championships we’re ready to amaze the public with some special effects and to offer the audience a truly great interactive experience. This is going to be a tournament to be remembered!

Have fun!
Fun With Balls Team